The Guardian view of golf's wedge issue: the triumph of brain and brawn

Bryson DeChambeau sounds like a character from a novel, one perhaps set on the Côte d’Azur in the 1930s, a raffish figure with a taste for the high life. He is, in fact, a 27-year-old golfer from California, and the only high life that interests him is the flight of a golf ball, which when hit by Mr DeChambeau goes an outrageous distance. Nicknamed “the scientist” for his single-minded application of new ideas about golf club design and swing mechanics – his aim is to do for golf what his hero Einstein did for relativity. He has married theory with sheer power, adding 40lb in muscle weight in the past six months to maximise the length of his driving and overwhelm golf courses, even one as fearsome as Winged Foot in New York, where he was the runaway winner of the US Open.

Every so often someone comes along who revolutionises a sport. Donald Bradman did it in cricket in the 1930s with batting so perfect the English bowlers had to resort to bodyline – bouncers directed at his head – to curb him. Mr DeChambeau may have an even bigger impact on golf than “the Don” had on cricket, with pundits saying it will never be the same again – the authorities are already discussing changing the composition of the ball to reduce the distance he can hit it. His bomb and gouge approach is rendering great old courses impotent, offending golfing purists who dislike his power game, his ugly, all-action swing, the fact he doesn’t much care whether he hits the fairway or not – distance, not accuracy, is the key – and his brash persona. He annoyed fellow pros at a tournament in July when he tried to have his ball moved under the “dangerous animal” rule because he’d seen a red ant and thought he was close to an anthill. They also criticise his slow, deliberate way of playing. “I’m definitely changing the way people think about the game,” says Mr DeChambeau.

What the fuss is about is a power hitter proving unstoppable in a sport where artistry and touch are supposed to be the keys to success. There have been plenty of other players who hit the ball a long way, and some of Mr DeChambeau’s contemporaries can at times match his driving lengths, but no one consciously brutalises a course the way he does. Aficionados in what remains a very conservative sport tend to prefer golfing artists such as Seve Ballesteros and Lee Trevino, players who could conjure improbable shots from apparently impossible positions.

There are, though, counter-examples in other sports. Venus and Serena Williams’ power game revolutionised women’s tennis, and no one argues that their achievements were somehow unethical. Norwegian boxer Cecilia Brækhus, who has taken her sport to new levels, welcomes the triumph of power over grace in female sport, pointing out that when she started out “women with muscles were frowned upon”. Nostalgists may have to accept that the world has changed. We are unlikely to see another CB Fry, who at the turn of the 20th century represented England at both cricket and football and equalled the world long-jump record before turning down the throne of Albania. The age of the graceful, gifted amateur is over. Science trumps art and 10,000 hours spent in the gym are never wasted.

Source: The Guardian view of golf's wedge issue: the triumph of brain and brawn

Plenty of new golfers are flocking to the game in 2020.

All spring, companies like ours tracked numbers like “golf course openings” and considered the potential effects of the coronavirus on the industry. But as we learned more about the virus and about our collective response; one thing became more and more clear: golf had the potential to serve as an ideal quarantine outlet.

The whys are fairly intuitive. We’ve learned that staying outdoors means a lower risk of transmission, and golf is entirely outdoors. We’ve learned that keeping other people at a distance helps, too, and golf requires no real proximity. You can play golf alone, and you can play without ever going inside, and there’s a good chance you can play without driving too far from your home, too. Golf course operators had reasons to be cautiously optimistic that if they were able to reopen, golfers would flock to the fairways. And the numbers show that’s exactly what they’ve done.

All year, the National Golf Foundation has done excellent work tracking the effects of the coronavirus (which you can check out here!) on the golf industry. Their latest numbers show a massive uptick in play; U.S. golfers logged 20% more rounds in August 2020 than August 2019. The increase mark the fourth consecutive month with a year-over-year increase and underscores a trend: People are playing a lot of golf.

What does that mean? Let’s dive into Q&A mode to get all our burning questions taken care of.

What do the latest numbers tell us?

The latest report from Datatech Golf tracked August rounds at 20.6% up year over year, which means an increase of roughly 10 million rounds over 2019. That comes on the heels of a 13.9% increase in June and a 19.7% increase in July, which totals up to a three-month stretch of major growth — and 27 million more rounds played over that period than last year. 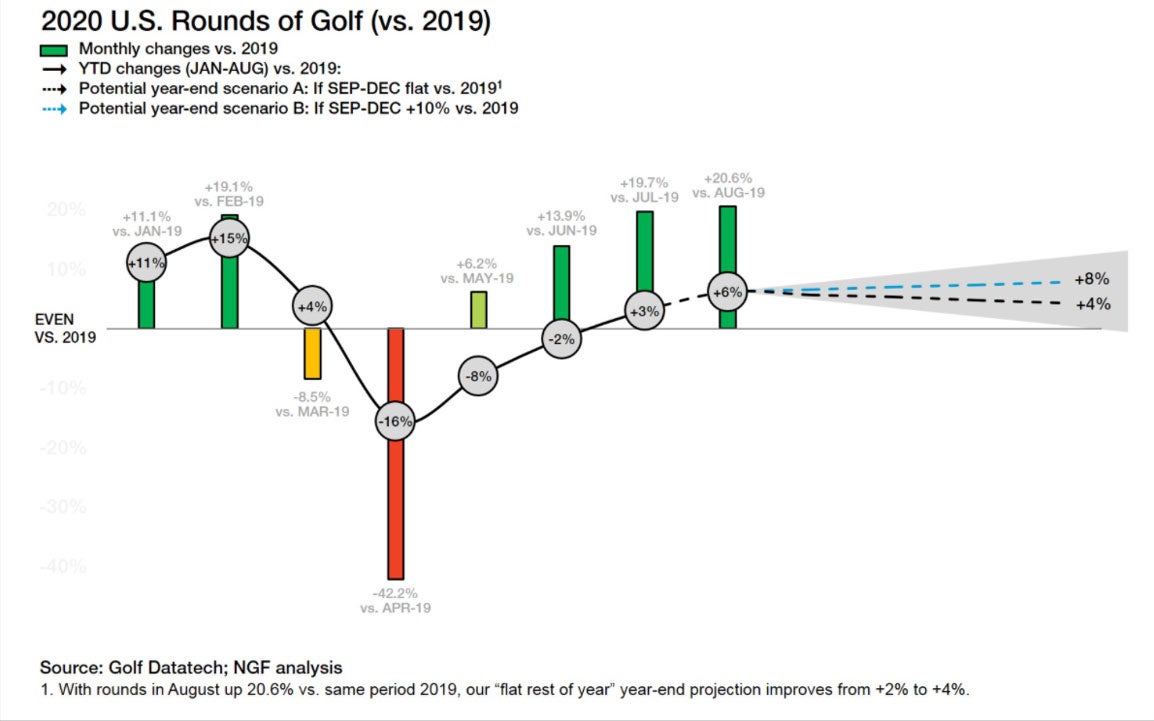 The summer of 2020 has seen a large uptick in rounds of golf played.

Which states saw the biggest gains?

Rounds in Texas were up 39%, rounds in Florida were up 37% and rounds in Arizona were up 31%, according to the NGF. Every state saw at least a 2% increase in rounds played.

What other factors are involved?

Plenty of golf’s growth can be directly attributed to the coronavirus: golf is safe, it’s distanced and people have fewer options available. But there are other factors to consider, too, including the weather. The NGF cited a warm, dry summer as partially responsible for the uptick in play, too.

“No doubt the weather has really cooperated,” NGF CEO Joseph Beditz wrote in an email.

But that comes with a caveat — the hot summer has given way to some extreme weather conditions in September, including wildfires in the West and severe storms and hurricanes hitting various large golf markets across the southern and eastern U.S.

The gains of the last three months have brought the entire year’s numbers back into the black, and through August golf rounds were up 6% year over year. The NGF’s optimistic line of projections suggest that a strong finish to the year could mean an 8% rise year over year, while even a downturn over the last four months of 2020 would still likely result in a year-over-year gain of at least 2%.

Will new golfers stick around?

It’s hard to say. Retention seems to be the NGF’s main concern. Getting new golfers to stick around and keep playing has been “golf’s Achilles heel for some time now,” the study says. Increased exposure to the game hasn’t necessarily led to more people picking up golf in a serious way. As things get closer to “normal” over the coming months and years, it’s inevitable that some new golfers will return to their old activities — but we sure hope that some stick around and play.

Are they ever! In August, consumers purchased $331 million worth of golf equipment, a 32% increase over August 2019 ($251 million). July marked an all-time record with $389 million in equipment sales.

Even with those massive increases, the retail market is still down 4.1% for the year, which serves as a good reminder that, rounds or not, every corner of the industry has faced plenty of challenges this year. For months, closed bars, restaurants, clubhouses, pro shops and amenities meant inevitable declines in revenue.

But in the last few months, things are trending in the right direction, which means that if you’re feeling the golf itch, we’ve got good news for you: you’re in good company.

You can check out more fascinating information from the NGF’s report here.

Dylan Dethier is a senior writer for GOLF Magazine/GOLF.com, where he’s told the story of a strange cave in Mexico, a U.S. Open qualifier in Alaska and plenty in between. Dethier joined GOLF in 2017 after two years scuffling on the mini-tours. He is a Williamstown, Mass., native and a 2014 graduate of Williams College, where he majored in English. Dethier is the author of 18 in America, which details the year he spent as an 18-year-old living from his car and playing a round of golf in every state.

Bill Murray is facing legal action from the Doobie Brothers after allegedly using their music in a golf shirt commercial without permission.

The Ghostbusters star used the band’s track Listen to the Music in a commercial for his William Murray line of golf clothing’s Zero Hucks Given shirts – prompting a legal letter from the band’s attorney Peter T. Paterno.

In a jokey missive, shared on Twitter by The Hollywood Reporter’s Eriq Gardner, Paterno wrote: “It’s a fine song. I know you agree because you keep using it in ads for your Zero Hucks Given golf shirts. However, given that you haven’t paid to use it, maybe you should change the company name to ‘Zero Bucks Given.’”

Accusing the star of failing to pay for other tracks, he continued: “We understand that you’re running other ads using music from other of our clients. It seems like the only person who uses our clients’ music without permission more than you do is Donald Trump.

“This is the part where I’m supposed to cite the United States Copyright Act, excoriate you for not complying with some subparagraph that I’m too lazy to look up and threaten you with eternal damnation for doing so But you already earned that with those Garfield movies. And you already know you can’t use music in ads without paying for it.”

The letter ended by criticizing the shirts, adding, “We’d almost be OK with it if the shirts weren’t so damn ugly. But it is what it is,” before requesting he and his firm pay up for the use of the music.

Murray, a keen golfer, founded his clothing company in 2017. He is yet to publicly respond to the legal letter.