Despite citing the surge in coronavirus cases and economic fallout from the pandemic in California, Sutter Health failed to persuade a state judge on Thursday to delay the $575 million settlement it reached last December over accusations of price gouging and monopolistic practices.

Sutter, which has already received hundreds of millions of dollars in federal coronavirus aid, argued it needed three more months to decide whether it should try to abandon the settlement terms. The sprawling health system in Northern California warned that the costs of the pandemic might force it to raise rates for patient care beyond caps set by the proposed settlement.

But Superior Court Judge Anne-Christine Massullo was not swayed. While sympathetic to concerns over the rising number of infections in California, the judge refused to give Sutter more time, scheduling a hearing next month on the preliminary agreement. Sutter Health could still try to block final approval of the settlement, which also prevents it from forcing insurers to include all of its health facilities in insurance policies rather than coverage for some.

“Adjusting our entire integrated network to respond to Covid-19 has been an incredibly costly and difficult endeavor that will significantly impact us for years to come,” Sutter said in a statement after the hearing.

“Over the last few weeks, like the rest of the state, we’ve seen an uptick in cases of Covid-19, including hospitalizations that have pushed us to our highest surge levels,” it added. “This surge requires ongoing emergency response efforts across our integrated network as we continue to provide high quality care during these uncertain times.”

The agreement is the result of a lawsuit filed by California’s state attorney general, Xavier Becerra, who argued that Sutter had essentially cornered much of its market, corralling insurers and patients so they were unable to go somewhere else for less expensive or better treatment. Employers and patients paid much higher prices for care, Mr. Becerra contended.

While Sutter did not admit any wrongdoing, the case represented an important victory for state regulators seeking to curb the power of large hospital groups, which through consolidation in recent years now dominate much of the country. Leemore Dafny, a Harvard health economist and former regulator, said, “What the California attorney general has succeeded in doing ought to inspire forward-looking attorneys general.”

The settlement should be viewed separately from the economic impact of the virus on the hospitals, she said.

The Sutter case could also have a significant impact on how the pandemic reshapes the health care landscape. Hospitals have clearly sustained a financial blow from the pandemic, with losses expected to exceed $320 billion by the end of the year, according to one estimate.

Many of these large systems have already received a major portion of the $175 billion in federal funds allocated by Congress to help hospitals during the crisis.

That federal aid has offset roughly a quarter of the loss of net patient revenues of the biggest hospitals in the state, according to a new analysis by researchers at the Petris Center at the University of California at Berkeley. Mr. Becerra’s office had requested the report, which was released on Thursday after the judge’s decision.

Sutter has received $317 million in those federal funds as well as other government money because of the crisis, according to the report.

The big hospitals that have the largest portion of revenues from private insurers and that operate in highly concentrated markets, including Sutter, received the most money, the researchers found. The calculation was adjusted to take into account individual hospital patient populations.

The hospitals’ “market power is giving them more reimbursement,” said Richard Scheffler, the director of the Petris Center.

Weaker facilities and physician practices are struggling to keep their doors open, and many are expected to be scooped up by the largest systems, which would increase their leverage even more.

“This is the moment where strong antitrust enforcement is more important than ever,” said Jaime King, a senior scholar at the U.C. Hastings College of Law.

“The healthy systems are looking forward to the opportunity to make strong acquisitions,” she said. “Regulators should be matching them toe to toe.”

As a way of preventing even further consolidation, which could lead to higher prices and lower quality care, Mr. Becerra is seeking greater authority to review the deals under a proposed state law.

“This pandemic can’t be an excuse for ‘big fish’ hospital systems to swallow up their smaller but able competitors,” he said. “Increased market consolidation comes at a cost to consumers.

“As our nation confronts today’s health and economic crisis, we urgently need the tools to hold health care giants accountable to consumers and competition.”

But some combinations in which a larger system keeps a struggling hospital open to meet community needs are not likely to meet much resistance, said Torrey McClary, a health care lawyer with King & Spalding.

While the number of deals fell after the pandemic hit, health systems are likely to begin considering mergers and acquisitions in the coming months, she said. “Those conversations are continuing,” Ms. McClary said.

In making its argument for a delay, Sutter described the current crisis as having “completely upended the health care system in Northern California,” according to its recent legal filings. It cited a $1 billion loss in the first three months of the year.

Sutter contended that it might not be able to abide by the settlement terms, and raised the possibility that it would have to charge higher prices beyond the limits in the agreement because of surges in Covid-19 patients.

In their report, however, the Petris Center researchers also pointed to the substantial financial cushion many of these hospitals have. They calculated that Sutter alone had more than $5 billion in financial investments and cash.

Sutter responded by saying that the demands of the pandemic are forcing it to look beyond those assets.

“While we are fortunate to have this ability based on our reserves, we believe we cannot solely support Covid-19 efforts today without responsibly balancing our future community and patient needs,” the health system said in an emailed response.

Mark Miller, a former federal official who is now an executive at Arnold Ventures, a philanthropy that has been a sharp critic of high hospital costs, argued the big systems should be using their reserves rather than seeking to raise their prices. “We might expect them to draw on their own resources,” he said, noting that they are also getting federal funds to help with their losses.

“There is a legitimate fear they will use those funds to engage in further consolidation and further price increases,” he said.

Employers, which joined with unions and the attorney general to bring the case against Sutter, argued that it should not be allowed to use its market power to raise prices, despite the pandemic. “What Sutter seems to have overlooked is the people paying these bills,” said Elizabeth Mitchell, the chief executive of the Pacific Business Group on Health, which represents employers that purchase coverage for their workers.

The crisis has made it much more difficult for employers, including state governments, and individuals to afford care, she said. “We do not believe price gouging and continued inflation of prices beyond what is necessary is sustainable,” she said. “Families and business can’t absorb those costs.” 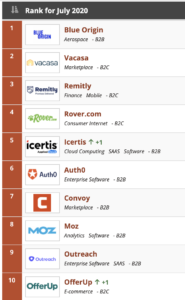 The ongoing global pandemic is rewriting the startup playbook. Some companies have accelerated growth plans, many pivoted or reduced staff, and others are cautiously charging ahead.

In the latest update of the GeekWire 200, our ranking of the Pacific Northwest’s privately-held tech startups, health benefits platform Accolade (previously ranked No. 7) graduated from the list in Seattle’s first IPO of 2020 during a period of increased demand for health technologies but also broader uncertainty about an economic downturn.

Companies across other sectors are not only weathering the COVID-19 storm but growing quickly. Many have extra cash in the bank, too, as venture capitalists are pouring money into Pacific Northwest tech companies at unprecedented levels. The number of deals and dollars invested in the first half of 2020 — $2.3 billion into 135 deals — significantly outpaced the number in 2019 and 2018, according to a GeekWire analysis.

We also took a closer look at the GeekWire 200 to see which types of startups are moving on up, even while the regional and global economies are in flux. Here are the biggest trends we’re seeing on the index this month. 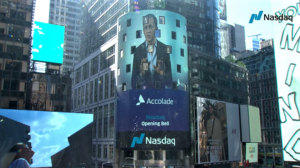 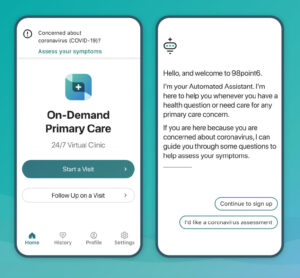 Health innovations have taken center stage during the global pandemic. In addition to Accolade’s IPO, several other health tech startups climbed the rankings: 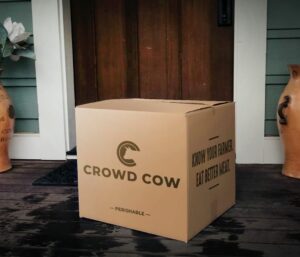 The GeekWire 200 is derived from our broader list of more than 1,300 Pacific Northwest tech startups, including Washington, Oregon and Idaho, and British Columbia. The rankings are generated from publicly available data, including social media followings, approximate employee counts (via LinkedIn) and inbound web links.

To be eligible for inclusion in the GeekWire 200, make sure your Pacific Northwest startup is included in the broader Startup List. (Please, no service providers, marketing agencies, etc.)

If you value resources like these, please consider becoming a GeekWire Member and be sure to check out our list and map of out-of-town tech companies with Seattle engineering outposts as well as our list of startup incubators, co-working spaces and accelerators in the region, startup fundings, and our GeekWork job board.

A coalition of mental health organizations on Friday urged Attorney General William P. Barr to stop the execution of Wesley Purkey, a convicted child killer who has been diagnosed with schizophrenia and Alzheimer’s disease.

“In expressing our position, we do not trivialize in any way the magnitude of Purkey’s crime or the suffering of his victim and her family,” the groups wrote in a letter to Mr. Barr. “However, we are gravely concerned that issues concerning Purkey’s competence to be executed have not been adequately considered by the U.S. or any court of law.”

The letter was signed by the National Alliance on Mental Illness, Mental Health America, and the Treatment Advocacy Center.

A Justice Department spokesperson did not immediately respond to a request for comment.

Purkey was convicted in 2003 of raping and murdering a 16-year-old girl and bludgeoning to death an 80-year-old woman in Missouri. He is set to be executed on July 15 in Indiana.

The groups say Purkey suffers from schizophrenia, bipolar disorder and brain damage. He experiences delusions and hallucinations, including the belief that people were spraying a poisonous mist into his room and that drug dealers implemented a device in his chest to kill him, the groups wrote.

Those illnesses have prevented him from comprehending the nature of his crimes and have grown worse in the years he’s spent on death row, the coalition says.

“His thought patterns have become increasingly bizarre and he has filed numerous complaints against prison officials that reflect his irrational state of mind,” the groups wrote. “In 2016, he was diagnosed with the beginning stages of Alzheimer’s disease, a condition that grows progressively worse over time and usually results in death within three-to-seven years.”

Instead of executing Purkey, the groups say Mr. Barr should sentence him to life in prison.

The coalition’s plea is the second attempt to halt or delay Purkey’s execution.

The American Civil Liberties Union last week filed a lawsuit against Mr. Barr demanding the Justice Department delay his execution so his Buddhist priest, who is staying away because of the coronavirus pandemic, can attend the lethal injection.

That lawsuit is still pending.