The Abraham Accords don’t guarantee peace in the Middle East

Thanks to the editorial board for asserting, in its Sept. 19 editorial “A lopsided Middle East strategy,” that the Israeli-United Arab Emirates-Bahrain accords “include the reinforcement of harsh authoritarian rulers; the deepening of U.S. entanglement in a sectarian conflict among Sunni and Shiite regimes; and the marginalization of the issue on which Israel’s future most depends: relations with the Palestinians.”

As a Palestinian American who cares deeply not only about my Palestinian sisters and brothers but also about my many Israeli friends, I wish the U.S. media would report more on the terrible conditions in places such as Hebron, which illustrate the extreme apartheid regime that Israel has imposed on the Palestinians.

“The March of Folly: From Troy to Vietnam” is the title of a book by the Jewish American thinker Barbara W. Tuchman describing the blindness that comes with the illusion of inexorable political and military power wielded at the expense of others.

Hebron is just the most visible manifestation of Israel’s march of folly, which can only lead to even more extreme instability in what has effectively become Greater Israel.

The writer is a member of the board of the Palestinian Christian Alliance for Peace.

An Army space support team from the Colorado National Guard deployed to the Middle East on Thursday after a small, socially distanced ceremony in Centennial.

The six-member group — the Guard's Army Space Support Team 30, from the 117th Space Battalion — will support U.S. Central Command operations by providing direct support to warfighters on the ground. The unit will also participate in strategic deterrence of enemies operating against American and coalition forces in the Arabian Gulf region, according to a press release from the Guard.

“These Colorado Army National Guard space professionals are providing a space capability critical to the warfight,” the adjutant general of Colorado, U.S. Army Brig. Gen. Laura Clellan, said in the release. “I am proud that they have maintained their strategic readiness and have volunteered to deploy during a global pandemic.”

The 117th Space Battalion has regularly provided space support to joint warfighting headquarters overseas since Sept. 11, 2001. The unit has also supported incident commanders during emergency response operations in the state, including the West Fork fire complex in 2013.

Sen. Van Hollen: Christians are most under threat minorities in the Middle East 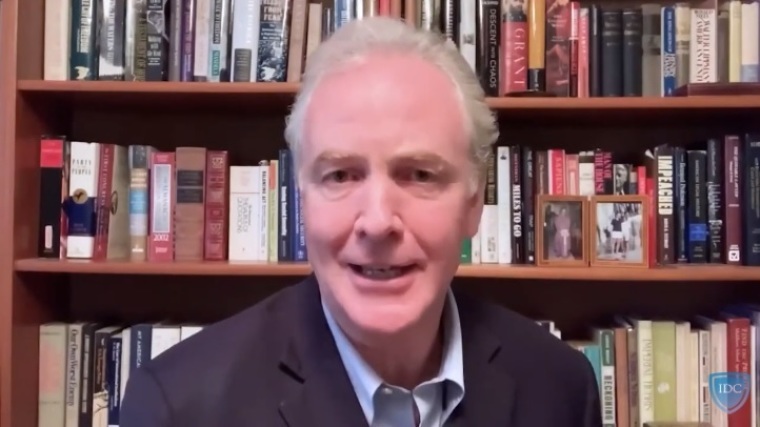 Democrat Maryland Sen. Chris Van Hollen was among a handful of lawmakers who spoke out against Christian persecution on Wednesday night, saying that Christian communities are the most under threat minorities in the Middle East.

Van Hollen was among several members of Congress who provided video messages played at an online global summit hosted by the prominent Washington-based human rights advocacy organization In Defense of Christians.

While the conference is traditionally held in person, this year it was moved online due to COVID-19 lockdowns.

“I’m proud to represent the great state of Maryland in the U.S. Senate. Maryland was originally founded by colonists who hoped to establish a safe haven for Roman Catholics who were fleeing religious persecution at that time in England,” Van Hollen, 61, said.

“I am pleased today, we are home to a diverse group of faiths who are free to practice their religions. We need to make sure those same rights extend to people around the world. In the Middle East, the minority religions that are most under threat and pressure are Christian communities.”

As many advocates across the globe have voiced concerns about the mass displacement of Christians in Iraq after the invasion of the Islamic State terrorist group in 2014, Van Hollen said the world needs to “make sure that those Christian communities have the rights that we have in the United States under the First Amendment of our Constitution and the rights set forth in the Declaration of Human Rights from 1948.”

“I am proud to work with you on a bipartisan basis to do that,” Van Hollen said.

The top 7 stories of the day, curated just for you!Delivery: Weekdays

Van Hollen, in the past, has supported efforts advocated for by In Defense of Christians, which engages in grassroots political advocacy campaigns that lobby for the protection of persecuted ancient Christian communities in the Middle East. Among the efforts, Van Hollen and IDC have supported the Global Fragility Act of 2019 and Armenian Genocide Recognition.

The conservative and progressive lawmakers urged the State Department to consider designating certain countries where Christians and other minorities are persecuted as “countries of particular concern," a designation that carries with it the possibility of sanctions.

Such countries included in the letter are Syria, Russia, India and Vietnam.

Earlier in Wednesday’s program, Lankford praised the Trump administration for its “active engagement around the world” on the religious freedom front.

However, Lankford warned that the U.S. should speak out against the 84 countries that have blasphemy laws on the books, specifically calling out Pakistan, Saudi Arabia and Russia.

“Those 84 countries, a full one-third of the countries have everything from fines to the death penalty for simply not agreeing with the faith of whoever the leader is of that country,” Lankford said. “That is a very significant thing for us and it is one of the areas that we should try to speak out on.”

As countries like Pakistan have blasphemy laws that are often abused to mistreat Christians and other religious minorities, Lankford said that he has tried to push the issue of religious liberty “for a long time” when it comes to trade negotiations.

“We have to deal with the issue of religious liberty and also to be able to speak out against things like anti-Semitism, ways that other nations are isolating individuals,” Lankford said. “We saw as recently as this past July when an American citizen was standing in court in Pakistan being tried for blasphemy and a Pakistani citizen walked into the court and shot him dead in the middle of the court. We saw just days ago a Pakistani citizen put on trial for blasphemy and convicted for blasphemy and taken away from his wife and children because he didn’t convert to Islam after he was demanded to at his workplace.”

In the U.S. House of Representatives, a bipartisan effort has been ongoing for years to help support the needs of persecuted Christians in the Middle East.

Rep. Anna Eshoo, a California Democrat and the only Assyrian American member of Congress, has teamed up with Nebraska Republican Jeff Fortenberry to co-chair the Religious Minorities in the Middle East Caucus. Eshoo co-founded the caucus along with former Congressman Frank Wolf of Virginia.

In 2015, Eshoo and Fortenberry introduced a successful resolution to define the persecution of Christians, Yazidis, and other ethnic and religious minorities in Iraq and Syria as genocide.

“I couldn’t have a better partner in Congressman Fortenberry. We are colleagues … but it is our faith that has really cemented our relationship,” Eshoo said. “There is still much work to be done in different parts of the world, most especially in the Middle East to protect the Christians. So many have fled. Many have been left behind.”

Fortenberry stressed that over the last few years, the U.S. has “worked very hard to continue to supply aid to the beleaguered communities of northern Iraq.”

“We have also worked hard on a resolution that would look at integrating religious minorities into security forces of Iraq,” the congressman explained. “Those dialogues continue with the State Department as well as the Defense Department. The prime minister of Iraq has made encouraging statements toward the religious minority population. I’d like to think that thanks to Anna’s longsuffering in this space and our work together, perhaps we’re seeing a bit of fruit of the work there in that regard.”

John Barsa, the acting administrator of the U.S. Agency for International Development, said during the event that over the last several years, the U.S. has “spent over $450 million to help with the restoration of schools, infrastructure, roads and hospitals” in beleaguered northern Iraq.

“We’ve also funded psychosocial support, capacity building for organizations, mobilization of the private sector to invest in northern Iraq and much, much more,” Barsa said. “These efforts are essential to support these communities and their ability to recover, return and thrive in their ancient homelands once again. USAID is committed to this important work.”

Source: Sen. Van Hollen: Christians are most under threat minorities in the Middle East