© Provided by All 76ers on FanNation

Veteran guard Raul Neto won't be finding himself a new team to play for next season. According to Shams Charania of The Athletic, Neto is returning to the Washington Wizards for a second-straight season.

Last year, Neto joined the Wizards for the first time after a single stint with the Sixers. While in Philadelphia, Neto engaged in a backup point guard battle with Trey Burke at the beginning of the season.

By winning the battle in former Sixers head coach Brett Brown's eyes, Neto appeared in 54 regular-season games for the Sixers two years ago. With limited playing time on the court, Neto put up similar numbers as he did with Utah, where he spent the first four years of his NBA playing career.

After averaging roughly 12 minutes over the previous three seasons, Neto landed himself a larger role last year with the Washington Wizards. Appearing in 64 games and starting in 22 of them, Neto appeared on the court for a career-high of 21.9 minutes per game throughout the 2020-2021 season.

With his playing time expanded, Neto managed to drain a career-high of 47-percent of his shots from the field. He also knocked down 39-percent of his threes while averaging 8.7 points per game.

Neto proved himself to be a solid backup ball-handler for the Wizards. As they've made some significant changes to the roster this offseason, the Wizards could look quite different next year. However, Neto will still be around as he's set to return once again.

Justin Grasso covers the Philadelphia 76ers for Sports Illustrated. You can follow him for live updates on Twitter: @JGrasso_.

With a long history of producing solid NBA players, Thunder rookie Jeremiah Robinson-Earl is ready to impact the game at the next level.

In terms of schools that product quality NBA talent, Villanova is among the best.

“I think it just gives a lot of credit to Jay Wright and how he how he develops his players and kind of ingrained with that mindset of playing hard for 40 minutes getting doing all the little details getting yourselves off your team that lead to team success,” said Robinson-Earl in an introductory press conference. “I think Coach Wright for the two years I was there did a great job of developing me as a person off the court which is most important, but then also being the best player I possibly can be for the team.” 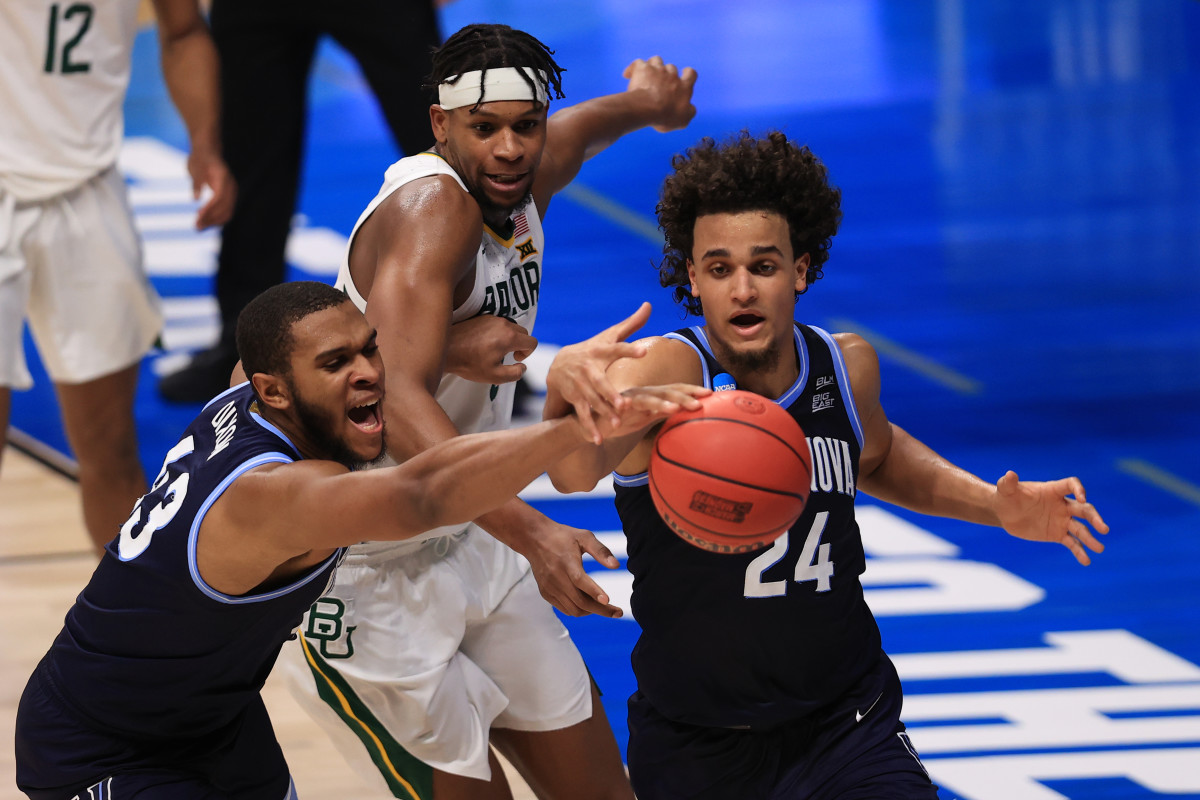 The next player from Villanova who could do the same is Jeremiah Robinson-Earl, who was recently drafted by the Thunder. In fact, Oklahoma City was so high on Robinson-Earl that they packaged their No. 34 and No. 36 picks to move up and take him at No. 32 overall.

An athletic forward, he’ll be able to play multiple positions at the next level. Whether it’s one of the forward positions, or even small ball center in some lineups, Robinson-Earl is NBA ready.

With an extremely polished game, he feels like a guy that lacks the superstar ceiling, but has a high floor. At minimum, Robinson-Earl projects to be a hard-working player on both ends of the floor that makes few mins takes and truly impacts winning.

Last season as a sophomore, he averaged 15.7 points, 8.5 rebounds and 2.2 assists per game. While his 3-point shooting still has quite a bit of work, Robinson-Earl is one of the most NBA-ready players in his entire class.

Want to join the discussion? Click here to become a member of the message board community today!

Series 2 for NBA Top Shot has officially wrapped, and unfortunately, instead of going out with a bang, it ended with a whimper. It was obvious that the demand for Top Shot Moments dwindled with each Playoff Pack drop, which was quite concerning given the playoffs are generally the most exciting time (and most viewed) portion of an NBA season. It’s tough to say precisely what caused the precipitous drop-off in demand, but through July we saw the continued downward decline in unique buys (60K, down from a March high of 184K) and total transactions (1M, down from 1.7M the previous month) – and with July’s total sales at $22 million (a $23 million drop-off from the previous month) it was Top Shot’s worst month since January. Additionally, July was their worst month ever in terms of the average cost of a sale, with things bottoming out at just ~$21.77 per transaction. We also saw it take three days for their Conference Semis pack to sell out despite only 185K being available. I remember when the market was poppin’ it wasn’t uncommon to have 200K people show up for a randomly announced stress test when only 25K packs would be available, and things would sell out in about a half-hour. Clearly, there’s been a decline in the user base, so, not great.

Top Shot exploded onto the scene in February, putting the NFT market on the map with an outrageous single-day sales total of $45.8 million on the 22nd, which prompted fawning articles from mainstream publications such as The Wallstreet Journal. However, it’s been a steady decline ever since that insane February day, so perhaps we should start viewing what happened in February as an outlier rather than a sign of potential. It’s also probably worth considering how much the pandemic factored into the exponential growth of the Top Shot market, as when we were locked down in our houses there wasn’t much to do but browse the internet, and collectibles of all sorts saw a surge in value. However, with vaccines now available to anyone who wants them and people going outside to enjoy the summer, there’s less of a desire to ensure you’re at your computer for a 2 pm pack drop. I know for myself, I was hiking with my Dad when the And Then There Were Four pack was released, and thus didn’t even bother to show up for that queue. However, we can’t blame everything on the improved weather, like I said at the top, it’s been a slow and steady decline and Top Shot has made plenty of highly questionable decisions along the way.

It’s not uncommon for me to see a Moment or player in any given set and just think to myself: why? Why would you choose to represent Desmond Bane with an objectively average layup? Why would you make 54 First Round Moments? Why do guys like Alex Caruso and Cam Reddish have so many Moments? Why does Darius Garland have so few, and why does Ky Bowman have any at all? Let alone three. Why do role players have Legendary Moments? What goes into the selection process for identifying what highlights will be made into Moments, and how do they determine what Challenge Rewards will be… and why are they often so bad at it?

Honestly, the Challenges, in general, are a problem for Top Shot, as you’re nearly guaranteed to lose money (perhaps a lot of it) unless you get lucky on the serial, and that’s not really a fixable issue as it’s the users themselves who are racing to the bottom to lose as much money as quickly as possible once the Challenge clock strikes zero. Imagine if you were a new collector and decided to complete a Challenge right away – it would be exciting collecting the Moments – but absolutely infuriating the second the Challenge ended and all your Moments tanked to half of what they were worth. Guaranteeing big losses is a good way to get newcomers to rage quit.

And while the Challenges certainly are a problem for Top Shot, perhaps their most egregious error thus far has been the introduction of a two-tiered buying system via insane Collector Score requirements. Instead of allowing everyone to have an equal opportunity at striking gold with a Rare or Legendary pack, they’ve now created a marketplace of the haves and have-nots, rewarding collectors who had the ability to throw thousands of dollars into their Top Shot accounts while penalizing folks who were smart enough to not throw away their money on silly Challenges and overpriced Moments. They rolled out this buying system under the auspices of “rewarding their true collectors,” but in reality, it was just another way to try and gas the market and to save face after the Cool Cats Master Challenge debacle.

As a reminder, the Cool Cats Master Challenge cost roughly $10,250 to complete, the Reward was an okay LaMelo Ball dunk (why a dunk instead of a dime?), and at its peak that Ball Moment wasn’t worth much more than $1,800 unless you had an insane serial. In fact, when that Reward initially hit the market, it was going for as low as $700, so anyone who completed the Master Challenge lost thousands of dollars. And what did Top Shot do when these whale collectors screamed bloody murder? They bent the knee. They rewarded the Cool Cats holders with their own chat in Top Shot’s discord and granted them automatic entry into the remaining Series 2 premium pack drops; pack drops that required outlandishly high Collector Scores to qualify for. They essentially threw money via Rare and Legendary drops to their biggest spenders, and they did so at the expense of the rest of the community.

Lastly, I think the supply is already too high, and it’s only going to get worse with each Series. One of the reasons it was fun back in February was you could make decent money flipping Commons for a profit because the supply was relatively low, meaning all the available Moments were intrinsically more valuable. Back then, it was rare to see any Moment sell for less than $10, but now it’s not hard to find Moments for as little as $2. Instead of selling these NFTs like Nikes they’ve gone with more of a New Balance approach, they flooded the market with a plethora of average Moments, which drove down the overall value of everything. Even the Series 1s have started tanking, and generally speaking, almost no Moments have retained value.

So, does Top Shot have a future? I’m honestly not sure. There are more than just a few issues here, but it needs to be said that this thing is still in beta. Top Shot is still trying to figure this thing out, and they do have the stamp of approval from the NBA, in addition to having the backing from various players around the league. Dapper labs has received millions in funding from the likes of Michael Jordan and Klay Thompson, and it is still possible to make profits on the site through strategic buys around Challenges. I’m hopeful that Top Shot will clean up their act, and I’m hopeful that this will be the new form of collecting. Despite all my misgivings, I do genuinely enjoy the product, and I’ve made around $400 in profits. It may be a long time before we see another month like February, if ever, but if Top Shot can stay in business for another 10 years, then these early Series Moments could potentially have a lot of value down the line. One would hope so, at least.