Packers at Cardinals picks, plus NFL owners meetings get testy and one trade every NFL team should make

Ladies and gentlemen, welcome to the Thursday edition of the Pick Six Newsletter!

We're all a part of history today and that's because for the first time ever, the Thursday game might be the most exciting game on the NFL schedule this week. Usually, I spend half the week complaining about the bad matchup in the Thursday night game, but not this week. This week, we're getting the undefeated Cardinals against the 6-1 Packers.

The only downside to this game is that neither team will be at full strength, with the Packers missing an offensive star (Davante Adams) and the Cardinals missing a defensive star (J.J. Watt), but I don't care. I'm still pumped for the game.

We'll be going in-depth on Packers-Cardinals in today's newsletter, plus we'll be dissecting the NFL's owner meetings, which have gotten kind of testy this week. We'll also be going over trades that every team needs to make before the deadline. That's a lot to cover, so let's get to the rundown.

If you're planning on betting any money on tonight's game, then you're going to want to make sure to listen to today's episode of the podcast before you place any bets. For today's show, Will Brinson brought on CBSSports writer Tyler Sullivan, and the two went into full gambling mode.

Here are several props they like for the game:

For more props and their actual predictions for tonight's game, be sure to click here so you can listen to today's episode. If you'd rather watch today's show, you can now do that on YouTube!

2. Thursday night preview: Prepping you for Packers at Cardinals

With the undefeated Cardinals facing the 6-1 Packers, this feels like it could end up going down as one of the best Thursday night games ever. However, the game has lost about 2% of its luster over the past week due to the fact that several key players won't be on the field. Green Bay won't have Davante Adams, who's been knocked out due to COVID. The Packers will also be missing Allen Lazard and defensive coordinator Joe Barry.

On the other side, the Cardinals won't have J.J. Watt, who is not only expected to miss tonight's game, but might be out for the rest of the season after undergoing surgery on his shoulder this week. Despite those absences, this is still a huge game and it might go a long way toward deciding who gets the top seed in the NFC.

My good buddy Jared Dubin put together our deep-dive preview for this game at CBSSports, and here's how he sees it playing out:

You can get a full preview of the game from Dubin by clicking here.

If you're thinking about betting on the game, Tyler Sullivan put together a full gambling preview.

You can check out Sullivan's full gambling preview by clicking here.

The NFL's fall league meeting has been going down this week, which is notable because it marks the first time in nearly two years that the NFL owners have been able to meet in-person. That being said, they might want to think about going back to Zoom meetings, because it appears they're not getting along so well.

The meetings got a little testy this week and here are a few reasons why:

4. One trade each team should make before the deadline

With the NFL trade deadline less than one week away, we thought today would be a good day to look at one trade that each team needs to think about making before the deadline hits Nov. 2.

Cody Benjamin pored over the needs of every team and came up with one potential deal for all 32 teams. For some teams, this involved trading away a star player, but for other teams, it involved acquiring a player that will help them make a playoff run.  Basically, some teams will be buyers and some teams will be sellers.

With that in mind, here's a look at what Cody is proposing for five different teams:

If you want to see Cody's proposed list of all 32 players who should be traded, then be sure to click here.

For the fourth time in six years, J.J. Watt will miss significant time. The Cardinals pass-rusher suffered a shoulder injury during Arizona's 31-5 win over Houston on Sunday, and although he played part of the game with the injury, it turned out to be more serious than anyone thought.

Here's what we know about the situation:

That being said, it's almost certain that Watt won't be returning for any regular season action, which means he'll be finishing the year with one sack and 10 tackles, including five that went for a loss.

It's been a busy 24 hours in the NFL, and since it's nearly impossible to keep track of everything that happened, I went ahead and put together a roundup for you.

Source: Packers at Cardinals picks, plus NFL owners meetings get testy and one trade every NFL team should make

The Sportsbook Wire team is here to help you with your Week 8 NFL picks. Our writers offer up their selections on the money line, spread and Over/Under for every game on the Week 8 NFL betting slate. Visit SportsbookWire.com for more NFL picks and predictions throughout the season.

The Arizona Cardinals (7-0) are the final undefeated team of the 2021 NFL season. Will they keep the streak going tonight against the 6-1 Green Bay Packers?

Check out our staff predictions before locking in your Week 8 NFL picks.

If you’re looking for more sports betting picks and tips, access all of our content at SportsbookWire.com and BetFTW. Please gamble responsibly.

Gannett may earn revenue from Tipico for audience referrals to betting services. Tipico has no influence over nor are any such revenues in any way dependent on or linked to the newsrooms or news coverage. See Tipico.com for Terms and Conditions. 21+ only. Gambling problem? Call 1-800-GAMBLER (NJ), 1-800-522-4700 (CO), 1-800-BETS-OFF (IA). 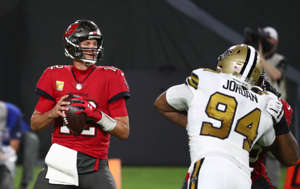 As the 2021 NFL season nears a halfway point that can no longer be calculated with a 17-game season, it’s time for Touchdown Wire’s Doug Farrar and Mark Schofield to get into all the Week 8 matchups with their usual tape breakdowns and advanced metrics!

Among the discussion topics this week:

How Aaron Rodgers could be in a world of trouble down his top targets against Arizona’s severely underrated defense; How Joe Brady and Matt Rhule can adjust the timing of the passing game to eliminate Sam Darnold’s “vapor-lock”; Why the Dolphins would be wise to bet long on Tua Tagovailoa, as opposed to going all in on Deshaun Watson (and why this matchup against the Bills is a terrible week to make that decision); Two more ways in which Matt Nagy has practiced extreme coaching malpractice in the case of Justin Fields; How Kevin Stefanski proved the doubters wrong without Baker Mayfield, and why he should do it again against the Steelers; Why the Eagles need to start doing more than just hoping their garden grows; Why the Titans need to be taken very seriously, despite a banged-up pass defense; How Joe Burrow continues to grow as a quarterback beyond his years, and why Doug had to apologize to Lou Anarumo); How the Texans have managed to play pretty decently in Cover-2, and why it won’t matter at all against Matthew Stafford and the Rams; How Bill Belichick will array his defense against Justin Herbert this time around; and… How Tom Brady is about to do the most incredible thing in NFL history.

Listen to the podcast on BlogTalk Radio: