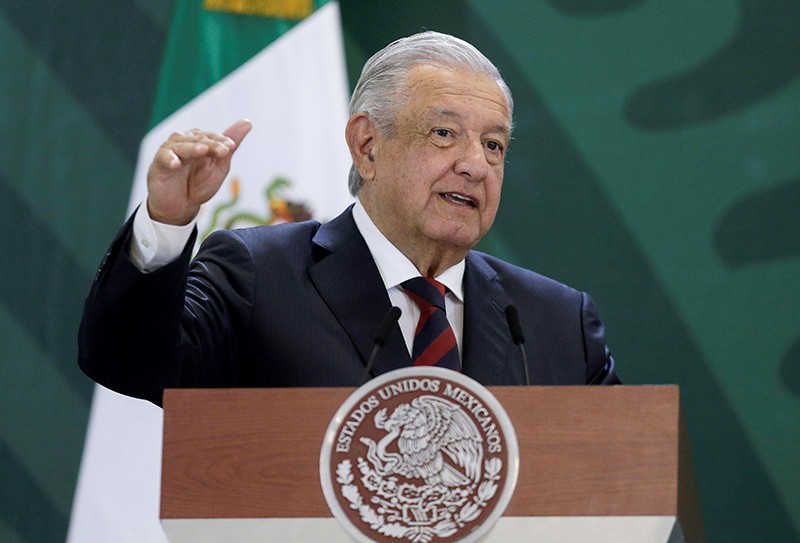 Mexican President Andrés Manuel López Obrador, who took office in 2018, has been at odds with scientists.Credit: Daniel Becerril/Reuters/Alamy

It has been almost a year and a half since Mexico’s Congress missed its deadline to approve a bill that would drastically overhaul how science and technology are governed. Worried about the lack of progress since then, researchers fear that political wrangling and a lack of consensus might waste a prime opportunity to boost Mexican science.

A constitutional amendment compelled Congress to pass the legislation by 15 December 2020. But the deadline came and went without lawmakers even discussing the various proposals on the table, or whether to merge them. One proposal that has yet to make its way to Congress, but that was made available for public comment in March, has drawn the ire of some researchers. They say that this bill, developed by the country’s science agency, the National Council of Science and Technology (Conacyt), ignores the community’s wishes and concentrates decision-making power at Conacyt. 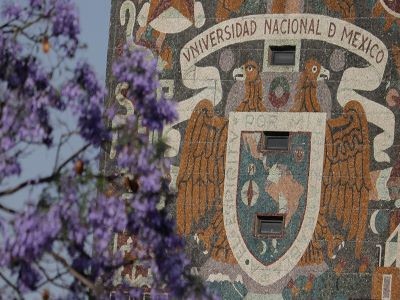 “What they are trying to do is to impose a single vision,” says Carlos Arámburo, a neurobiologist at the National Autonomous University of Mexico (UNAM) in Querétaro. He participated in a series of meetings with Conacyt to express worries about the proposal, but says that the agency did not address many of the community’s concerns and suggestions. Conacyt officials did not respond to Nature’s queries about criticisms of the proposal.

The wait for a new science law adds to tensions between researchers and Mexico’s left-wing president, Andrés Manuel López Obrador, who took office in late 2018. His austerity measures and pledges to fight corruption in Mexico have led to debilitating budget cuts for science, as well as accusations of organized crime against scientists. Under his government, scientists have sharply criticized Conacyt for irregular management of funds, unjustified dismissals of early-career researchers from the agency and what they see as disdain for private academic institutions. Conacyt has denied some of these allegations.

Many researchers think that if a bill is passed, it will be Conacyt’s version that will win the day. And it has its supporters.

“It seems quite reasonable to me,” says Edmundo Gutiérrez Domínguez, a physicist at the National Institute of Astrophysics, Optics and Electronics in Puebla — one of 27 public research centres across Mexico that are coordinated by Conacyt. The bill promises to regulate not only science, technology and innovation, but also the humanities — an area that some feel has been neglected by previous administrations. If approved, it would ensure that science and technology are reoriented to “solve the great problems of the country”, says Gutiérrez Domínguez, who was appointed director of his institute in 2019 by the head of Conacyt, María Elena Álvarez-Buylla Roces. 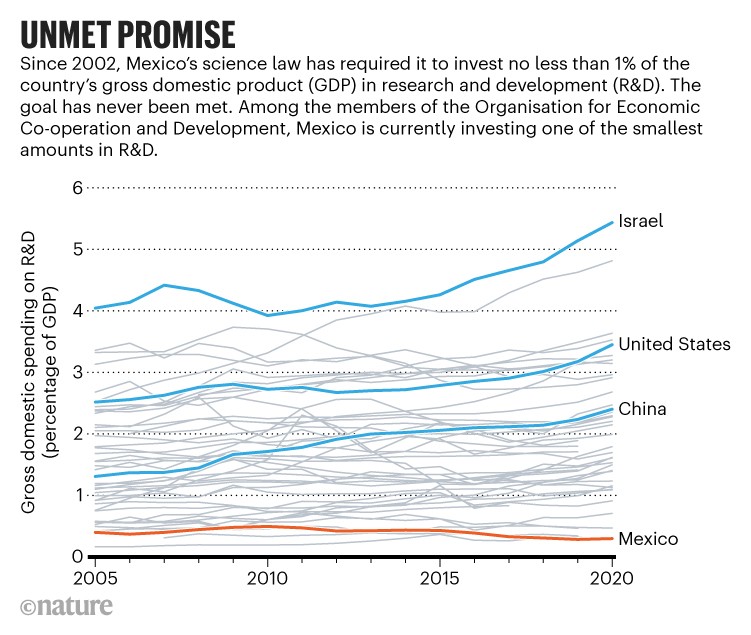 Other scientists are not so hopeful. “On the one hand, you see this speech of good intentions embodied in the law,” says Judith Zubieta, a science-policy researcher at UNAM in Mexico City. “On the other, you’re seeing concrete actions that completely contradict what the pretty words say.” For instance, Mexico’s current science law states that national spending on research and technology should not be less than 1% of the country’s gross domestic product. Conacyt’s proposal says only that the nation will provide “sufficient, timely and adequate” funds.

Although Mexico has never hit the 1% spending goal — the closest it has come was in 2010, when it invested nearly 0.5%, according to the Organisation for Economic Co-operation and Development (see ‘Unmet Promise’) — having a mandate is better than leaving the goal open to interpretation, says Carlos Iván Moreno, a public-policy researcher at the University of Guadalajara in Mexico.

Mexico’s current science and technology law was enacted in 2002, after intense lobbying by the research community.

Although the law had its strong points, it didn’t succeed in making science a priority in Mexico. In May 2019, an opportunity to improve the law arose when legislators modified the country’s constitution to include the right of its people to “enjoy the benefits” of science and technological innovation. The amendment required that Congress issue a general science law no later than 2020. Anyone could submit a proposal, and López Obrador asked Conacyt to draft the government’s. 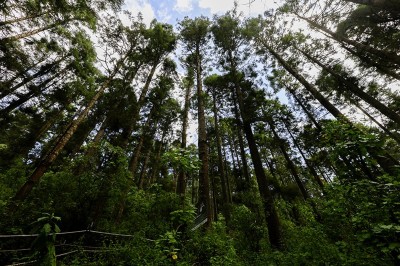 So far, four proposals have been drafted. Aside from Conacyt, they have come from a group of academics and a network of state science councils. More are expected from opposition lawmakers.

However, some of them “have [little] possibility of moving forward”, says Alma Cristal Hernández, president of the Mexican Association for the Advancement of Science in Mexico City. Conacyt’s version looks like the strongest contender, because López Obrador’s party and its allies hold a majority in Congress.

But not much has happened so far. Legislators have “unfinished business” with the new law, says Alfonso Cruz Ocampo, the technical secretary of the Science, Technology and Innovation Commission of Mexico’s Chamber of Deputies, the lower house of its Congress. The commission will help to review the various proposals that have been put forward. “We will seek to integrate the virtues of each of them,” he says.

The COVID-19 pandemic, a disgruntled research community and, most of all, political polarization have also contributed to the extreme delay, Moreno says. “The preliminary draft presented by Conacyt has been rejected in the main academic and institutional circles,” he explains. “There is no consensus.”

Conacyt’s leadership says its law will bring about positive change for science in Mexico. In an opinion piece published in the newspaper La Jornada last year, Álvarez-Buylla Roces wrote that, if approved, the legislation would “promote the advancement of knowledge” and the development of the country’s own technologies to ensure “the well-being of the Mexican people”.

But other provisions in Conacyt’s proposal have not quelled fears of bias against some scientific institutions in Mexico. 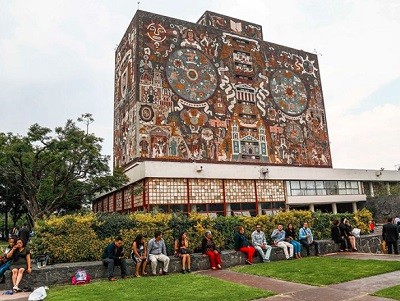 ‘I was dying of shame’: Mexican science faces its #MeToo moment

For example, the law would provide tax exemptions for universities and research centres when they purchase supplies, equipment and material — but only from state-owned suppliers. A letter written by Coparmex, an independent employers’ union that represents more than 36,000 companies in Mexico, calls this part of Conacyt’s bill “discriminatory”.

The government’s proposal also guarantees universal access to scholarships for students, as well as economic stimuli for researchers, but only as long as they study or work at public universities or institutions. “It’s deeply exclusionary,” says Romeo Saldaña Vázquez, an ecologist at the private Ibero-American University in Puebla. The measure means he would lose the extra stipend of 20,000 pesos (about US$1,000) he receives each month from the National System of Researchers, a programme managed by Conacyt that rewards scientists for their productivity. “I would no longer have an incentive to do research,” he says.

Most worrying, other critics say, is that the draft would give Conacyt power over most science-based policies in Mexico. The document implies the elimination of at least nine advisory bodies — some of which were created as a result of the current science law — that represent the country’s academic and scientific community. “I would see it as the return of a very centralized policy, a centralized vision of science,” similar to that in the 1970s, when all science-policy decisions fell on Conacyt’s shoulders, says Rosalba Medina Rivera, president of the National Network of State Councils and Organizations of Science and Technology in San Luis Potosí, which submitted its own law proposal to the Senate.

Gutiérrez Domínguez sees it differently. “It seems to me to be a policy that retakes control of science” by the Mexican government, adding that the law would allow the participation of different sectors of society, including the academic community.

The myriad of concerns has led some to ask: does Mexico even need a new science law?

“That’s a very important question,” says Alma Maldonado, a higher education researcher at the Center for Research and Advanced Studies in Mexico City. “There is a battle, a political and ideological dispute, over a law that could be beneficial — but could also do a lot of harm.”

The science commissions of the Senate and Chamber of Deputies are set to meet in mid-May to explore a way forward. If everything goes to plan, Cruz Ocampo says, the legislators will evaluate the available proposals and then craft a single document that will “substantially benefit” the humanities, science, technology and innovation in Mexico.

Giant manta rays (Mobula birostris) are some of the most iconic fish in the ocean. Their pectoral fins, which look a lot like wings as they swim, can reach nine meters from tip to tip. These gentle giants have few natural predators, but overfishing has landed the species on the International Union for Conversation of Nature’s (IUCN) endangered species list. Females take 10 to 15 years to become sexually mature and then only breed every few years, producing one pup at a time, so population recovery is quite slow. In order to better protect the species, scientists need to know more about their behavior, data that can be difficult to collect given the great distances the fish regularly travel.

A study published this week in PeerJ revealed that the waters of Komodo National Park off the coast of Indonesia—where it has been illegal to fish for manta rays since 2013—are home to a large aggregation of these manta rays. Researchers were able to identify more than 1,000 individuals thanks to diving photos from scientists as well as tourists. The patterning on the underside of a manta ray is as distinct as a fingerprint, allowing the scientists to comb through thousands of such images and get more information about each ray’s movement and behavior. They were able to identify common locations for feeding and mating, which can inform guidelines to better protect them from human impact.

Why it’s important to explore the science of touch

We experience the world through our senses: touch, sight, hearing, smell, and taste.

Among the five, the sense of touch is singularly important, a growing body of research confirms. As contributing writer Cynthia Gorney explains in this month’s cover story, “Human beings require the physical presence of others, the comforting touch of others, in order to stay healthy.”

At the School for Creativity in Andria, Italy, students learn that lesson at an early age. “The culture of touch in that school is daily,” says longtime National Geographic photographer Lynn Johnson. “Moment by moment. It’s very physical. They’re always hugging and kissing.” In the photo above, the children play a game in which a blindfolded student tries to recognize a classmate just by touch. Invariably they got it right, Johnson says.

This cover story assignment required Johnson to show the power of touch with her images. To do that, she told me, she “went on a mission: to try to look for situations, for people, for whom touch is a critical part of their lives—their survival, their orientation in life.”

That mission took her to Margaret Malarney and her family in Chagrin Falls, Ohio. “I met Margaret when she was minimally conscious. I didn’t see any response on her face,” Johnson says. But over a series of visits spanning seven months, Johnson witnessed “the way the family physically loved her back to life. We don’t know the science behind it; we don’t know why.”

And yet, Johnson says, “we can believe that touch has such value.”

Thank you for reading National Geographic.

This story appears in the June 2022 issue of National Geographic magazine.
Source: Why it’s important to explore the science of touch